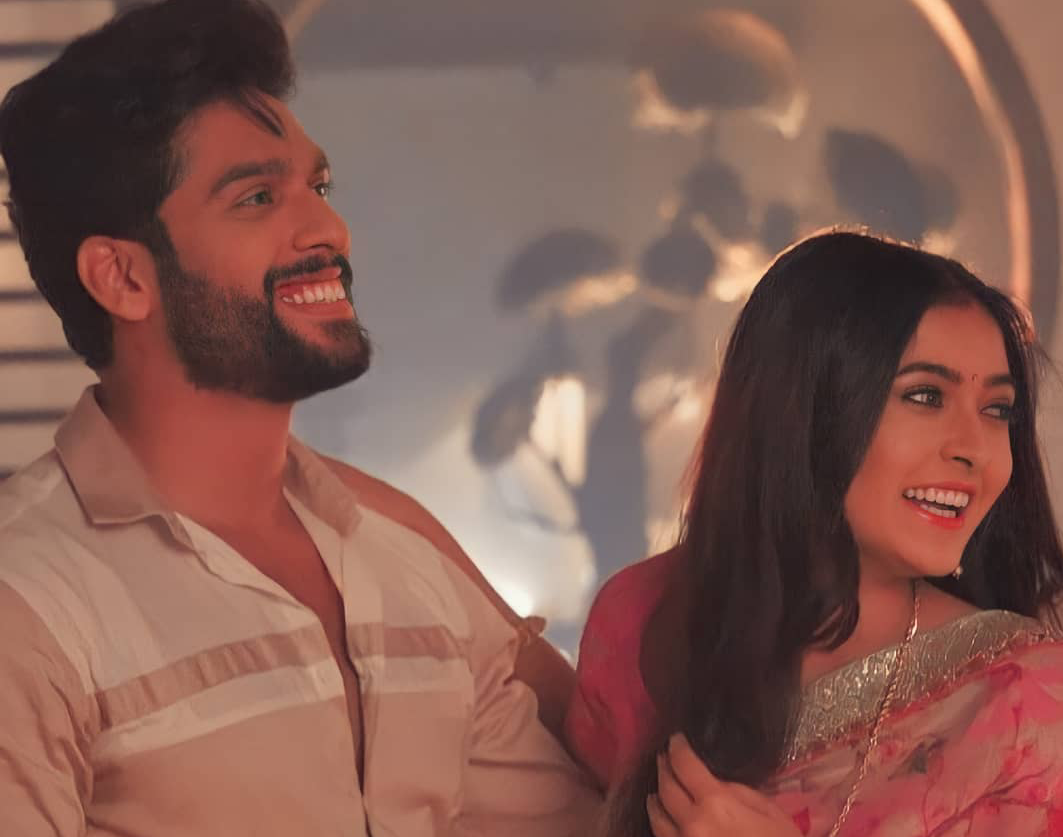 Pallavi was lovingly staring at the ring which her husband had gifted her few days before which he himself had designed it for her. No one has made her feel this special like Raghav does. She doubts if mandar was alive and never declared dead he could have made her feel like this. Her heart fluttered and she blushed furiously remembering the kiss she and Raghav shared few hours before she had to come to the deshmukh house to obviously help her ex husband who keeps giving her creepy and obsessive looks. She should have just listened to Raghav and not come here. It annoys her so much that mandar keeps trying to touch her with some or other reason and it feels like he does that deliberately.  Deshmukh family keeps reminding her that how she was supposed to be here with their ghar ka beta and not with Raghav. Her blood boils everytime she hears that, she was afraid at the beginning when she heard such things but her fear has vanished since she found out mandar can never have her back legally. She had been so relieved knowing that. Whomever framed that clause in Hindu marriage act she was thankful to that person with wholeheartedly.

” Pallavi, Pallavi” Mandar’s irritating voice shakes Pallavi out of her musing. She looks at him, he was touching her shoulder now and Pallavi shoves him away harshly. Mandar was taken aback by pallavi’s harshness, he looks at her in shock. Her eyes were flashing with anger and she looked ready to kill him.

” How many times do I have to tell you to not touch me and maintain your distance from me?” Pallavi yells at him. Mandar clenched his fists controlling his anger, he hated this Pallavi. The Pallavi he had left behind was fragile but this version of her was fiercy and was all ready to kill anyone who misbehaves with her. He internally cursed Raghav Rao for making her like this. He wanted to hit her very badly and show her place that is beneath him but he knows if he does that Raghav Rao will not waste a minute to tear him apart and Pallavi will never want to see him again. So he decided to thread very carefully and acted very helpless in front of Pallavi to gain her sympathy, though it worked to some extent but Pallavi still looked very doubtful of him and still was with that Raghav Rao. On top of that, whenever he tries to go closer to Pallavi she pushes him away and nowdays she even reprimands him from doing so. Not to forget he has to witness the love glances exchanged between that Raghav Rao and her which made him sick and left him frustrated.

” Pallavi  I’m so sorry, you looked so disturbed So I was just trying to help you. ” Mandar says to her. Pallavi seems to calm down hearing his explanation.

” Look mandar, I understand your situation but I think this is not working anymore. I think instead of helping you to move on, I’m holding you back. So I think we should stop this”  Pallavi says to him in her soft voice. She picks her handbag and starts walking away.

Mandar speds up to her and spuns her towards him ” No,Pallavi you can’t leave me”

Pallavi tries to push him away but his grip was too tight and she could not compete with his strength. She stomps on his feet, mandar not expecting pallavi’s sudden move loosenes his grip on her due to his pain which gave Pallavi the time to free herself from him and she was furious by that time.

” Raghav was right and I’m so stupid to get this easily manipulated. I’m telling you last time stay away from me”

Pallavi’s screaming brought the Deshmukhs out from their respective rooms.

” Pallavi I’m your first husband and I have first right on you” Mandar hisses. He had enough of this facade which was not working anymore. Now he is going to force her to accept him.

Pallavi scoffs,” oh hello I’m not some first come first buy policy and I’m not your wife anymore even law agrees with me. I’m only Mrs Pallavi Raghav Rao arthamainda”

” Why not now that she has a rich husband, why will she come back here?” Sulochana jumped in between the conversation.

” We took care of her like our own daughter when mandar was declared dead and this is how she repays” Vijay deshmukh sneered. Pallavi could not stop rolling  her eyes hearing such things.

” Took care of me like your own daughter seriously! Please I worked like a machine 24/7 in this house. If anything you should be the one repaying me back” Pallavi snaps back. She turns towards Sulochana,” and you, I’m warning you last time to not interfere in my life otherwise I would not be stopping my rich husband from sending you to jail now”. Sulochana gulps in fear under pallavi’s murderous glance. Pallavi can  be equally be terrifying like raghav if she wants.

” I keep bringing myself to this mess because of  my so called goodness, so I’m ending it right now” Pallavi says, she point her index finger closing her palm warningly at mandar and mandar for the first time trembled in fear witnessing her anger. Pallavi turns and starts to walk away from the Deshmukh house and none of the Deshmukhs had the guts to stop her.

Raghav stood in the entrance of the deshmukh house, his lips twisted into smug smile witnessing his wife’s outburst. Finally he smirks, He was waiting for this from a long time but he did not expect this moment to come this soon. Looks like mandar had literally pissed off Pallavi with his creepiness and Pallavi was not in good terms with most of the deshmukhs anyway. Now he did not have to worry about that creep lusting upon his wife anymore and trying to touch her at every chance. He would phone farhad to increase his house security and put some guards around Pallavi for her safety still he sorts out all the mess.

” Raghav tum..” Pallavi exclaimes in suprise to see her husband standing here and mandar who had followed her had to stop his steps and stand silently.

” Meetings got cancelled and I had no more important work. Thought to spend some time with my wife, any problem?” He asks her nonchalantly. Pallavi shakes her head, she tries hard to suppress her blush forming on her cheeks.

” Chale” he asks her, she nods. Raghav holds her hand interwining their fingers together and they both walk away leaving mandar to stare in dismay at the retreating figures.

Later in the car,Pallavi was pleasantly surprised when Raghav handed her two tickets to paris.

” Honeymoon ” he grins at her. Pallavi flustered hearing about it.

” When are we leaving?” She asks him not trying to sound excited and then checks the ticket to find out that they are actually leaving tomorrow. He did not even inform her.

” How will I pack everything?” Pallavi worries. She kept glaring at him for not telling her before. Raghav reasons her that if he would have said at the beginning she would have refused or made him postpone the trip because of Mandar so he did not.

” Relax saree ka dukhaan, pack only what is necessary others we can buy there itself” Raghav says to her only to get lectured about the importance of importance of money by Pallavi. He silences the only way he could by kissing her hand which was already in his grasp. Pallavi still chides him that he should concentrate on his driving. Her face was beaming in happiness as she looked at her honeymoon tickets. Raghav’s heart leapt seeing her smile. He promised himself that he would never let anything take away this smile from her face as he drove them back to the rao mansion.