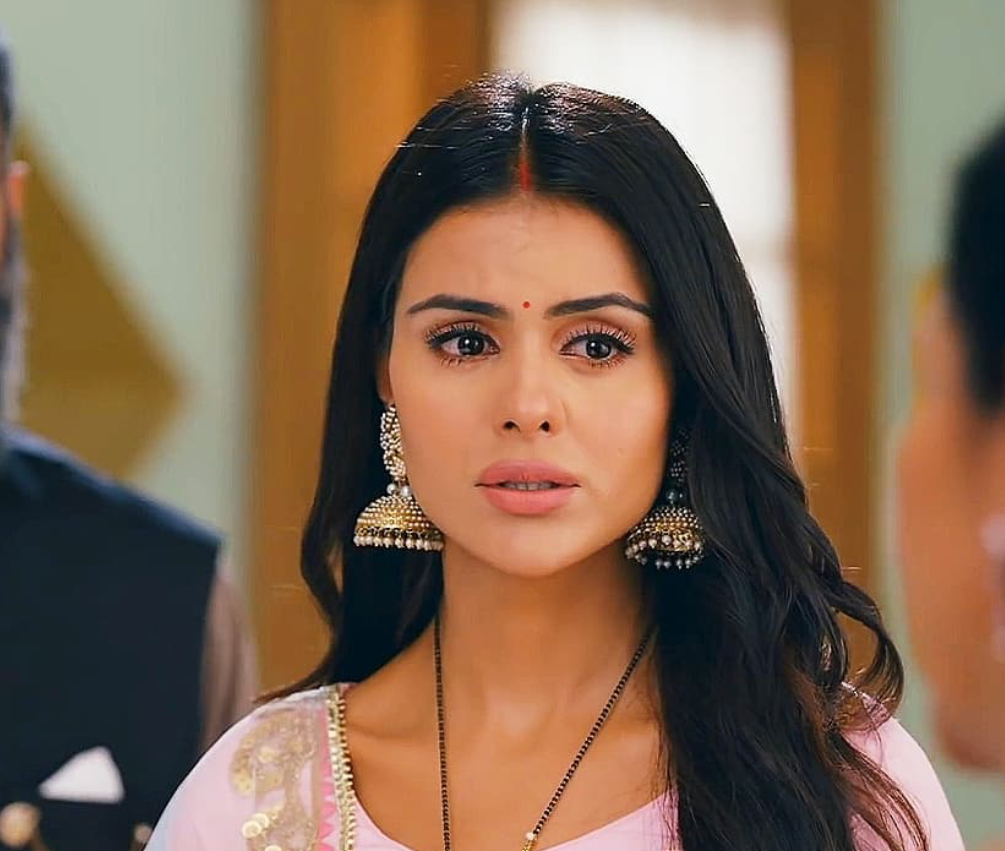 Tejo stumbles down, she shakes her head not able to grasp what she saw few minutes back. Her husband had carried her sister in his arms and rushed outside but that was not that broke tejo. The fact that fateh kept whispering Jasmine’s name and kept confessing that nothing would happen to her broke tejo. She kept telling herself that it was slip of tongue by fateh and it meant nothing but how could she unsee the love struck look on her husband’s face which was directed towards her sister. She buried her face in her hands and cried painfully when the truth finally hit her. She realized what kind of fool she had been.

Adhiraj and maahi rushed towards her,”tejo”

For first time in her life maahi wanted to smack her brother, anger was bubbling inside her. She felt disgusted by her own brother.

” Take me to the hospital where they have admitted Jasmine” Tejo says in low voice.

” Par Tejo ” adhiraj tries to explain her this is not the right situation.

” Please take me here” Tejo repeats her words raising her voice this time, adhiraj nods his head seeing that tejo was not in the state of listening to him. The virks who stood here were shocked by tejo’s sudden demand but when khushbeer saw tejo’s empty eyes he understood that nothing was going to right after this, his son has destroyed everything with his own hands. Nimmo as usual tried to taunt but tejo for first time did not even look affected by her words which shut her off.

Adhiraj and Tejo accompanied by maahi left the Sandhu house.

Amrik stood in the hospital with the rest of the Sandhus with victorious glint in his eyes. The doctor had informed that his Jasmine bhabhi was out of danger and fateh veer had rushed inside the ward to see her as soon as the doctor announced it. Now everyone knows fateh veer can’t move on or love anyone except Jasmine bhabhi. Now if tejo ji has little shame left in herself she would herself back off from the marriage and stop coming in between his brother and his bhabhi. His eyes caught the sight of tejo ji who was entering the hospital with her cousin and his sister who looked quite angry.

As they came nearer, the Sandhus attention went towards their other daughter whose heart had got broken today.

” Tejo puttar” satti went to comfort her daughter who pushed her mother away. Everyone were stunned by tejo’s step.

” Are you people happy now after spoiling my life the second time? You got me married to my sister’s lover and what did you expect?” She asked, angrily swallowing back her tears.

” But tejo puttar, we did not know” babe says but tejo ignores her family and looks at amrik, ” where is Jasmine and fateh?” She asks him.

” They are inside with each other as they should be ” amrik tells her, Tejo ignored the hurt she felt by amrik’s words. Amrik had always been bitter towards her but he was only one who tried to show her mirror instead of adding up to her illusions like rest of the people. He was the only who understood fateh’s obsession with Jasmine properly. Tejo regretted not paying attention to his words, she should have atleast she could have been spared from the heartbreak.

” Thank you” Tejo says to amrik and moves inside the ward.

Her heart breaks once more when she sees fateh holding Jasmine’s hand and was telling her something. Jasmine looked like she has gotten everything she has wanted like always. Tejo closed her eyes in despair, trying to gather her all her strength she needed to face the two people who destroyed her life for their own selfishness, no she would never show this two how they broke her. She opened her eyes determinedly and walked towards them. Fateh and jasmine who were lost in their own world did not notice her at first but as soon as fateh notices tejo he becomes alarmed and frees himself from Jasmine’s grasp and looks at tejo with his guilty look. Tejo stares at them blankly as if she was seeing them for the first time for what they were not what she thought of them to be, she kept shifting her gaze from from fateh to Jasmine. Fateh and jasmine were very uncomfortable under tejo’s gaze, they felt scared of her for unknown reasons.

” Tejo, it’s not what you think it is. Listen to me I will explain everything” Fateh says to her.

” I don’t want to know anything fateh, I want to know if what happened between us meant anything to you?” Tejo’s sharp voice made Fateh more nervous.

” It meant tejo, it means so much” fateh says to her. It did mean so much to him, he had loved her touches and he had loved the intimacy. A small hope flickered inside tejo that maybe fateh was just helping jasmine and here was nothing else. She was just overthinking but then she asks him one question which will clear everything to her for once.

” Do you still love jasmine?” She asks him very clearly not beating under the bush.

Fateh struggled to come up with a answer, but jasmine was fast to respond,” he loves me tejo, only me”

Tejo only looked at fateh waiting for his answer. Her hopes were quickly diminishing seeing him struggling to answer. Was he still confused? If he was confused then why had he initiated intimacy between them. Did he use her?was the one night they spend with each other meant nothing than s*x to him?

” Fateh” she crossed her arms and looked at him challengingly to answer her.

” Tejo I don’t know ” fateh says to her looking at her longingly. He takes a step towards her to comfort her and share his confusions. She always solves everything to him, surely she will solve this for him. She is his best friend. Tejo steps back much to his agony.

” Fateh why are you lying? You said to me that how no one can take my place in your heart and how it was too late now because I was now getting engaged with gippy” Jasmine’s words hit Tejo very painfully. Did fateh tell this to Jasmine after whatever happened between them.

” Did you tell this to her Fateh?” Tejo asks him, her eyes were flashing with anger. Her heart was burning in agony.

Fateh did not answer anything and lowered his eyes ashamed.

” Did you tell this to her fateh?” Tejo repeated her words demanding him to answer. She grabs his collar angrily controlling her tears.

” Tell me something fateh please” Tejo pleads to him.

” Tejo I did not mean it in that way” fateh lies to her not looking at her eyes, Tejo leaves his collar and steps away from him. Her face had paled and she looked at him with distaste.

” so it meant nothing to you, everything which happened between us meant nothing to you then why did you act and gave me false hopes. Why did you betray me? Why? You used me” Tejo accused him and cried in pain, heart broken that the person she thought as her world did this to her. He doesn’t see her as his wife but he did tell her that she was his bff. He betrayed not only their relationship but also their friendship by doing this. She will never forgive him for this.

” Tejo listen..” fateh tries to grab her hand but instead Tejo yanks her hand away from him. She thinks for a second before she flungs out her mangalsutra and throws it on fateh’s face. Jasmine gasped in shock seeing her sister’s behaviour, the rest of the family who had rushed inside hearing the raised voice were equally stunned by tejo’s behaviour.

” I’m freeing you from this realtionship, now you can fully pursue my sister without any hurdles. Rot in hell you both. You both deserve each other” Tejo spat out venomously. Both fateh and jasmine flinched at tejo’s tone. Tejo had never wished ill of anyone till now except at this moment where she wished that the two people whom she loved more than anything in the world burn in hell and never get a peaceful life. She turned away from both fateh and jasmine and walked from the hospital without listening to her family’s pleas and shoving off their attempts to stop her.

The post Tejo TS – I needed to lose you to love me (Part 1) appeared first on Telly Updates.